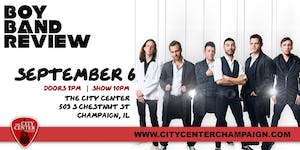 Boy Bands Review has captured the hearts of fans with their show that transport audience members back in time to the days of frosted tips and hunky frontmen professing their undying love. This biggest seller: The BOY BAND REVIEW is an incredible throw back experience with dancers and back up singers where the audience members relive the best years!

These New Kids heat up to 98 degrees with a fun show on any stage they are on.